skip to main | skip to sidebar

On friday 25th we were joined by Peter Ivin (twin brother of Chris) at our campsite in Bourg-Saint-Maurice, a commune in the Savoie (as in Savoy) department in the Rhône-Alpes region in south-eastern France.  Bourg, as it is commonly known, is the last large town along the Tarentaise valley in the heart of the French Alps and sits at around 700m above sea level.  This meant that we would start the following day's spin up to the Col de L'Iseran ascending the Alp, so Peter would find himself battling a mountain from the get go.  I was interested to see how he would find it, as we already had a few decent climbs in our legs at that stage. 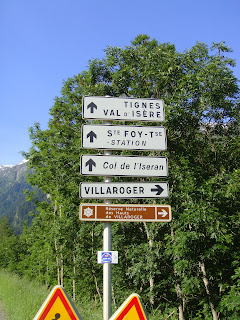 As I had finally settled into a pretty decent sleeping pattern I was feeling a lot better in the mornings.  Nonetheless I was still struggling with chowing down on museli and granola, peanutbutter sandwiches and fruit at 7am.  Invariably I would end up sitting across from young Tom Wakeling from Australia for what seemed like an eternity, munching away like a pair young calves eating calf nuts.

And so I was late again, but only marginally so.  I noticed that some of the group were struggling, starting out as we were on a 9% gradient out of Bourg.  I spotted an eager Pete Ivin putting in a big effort and his brother Chris reigning him in so he didn't explode after a few kms with his eagerness.  Luckily I was fresh enough to push on up past the peloton and soon enough I reached Tim "timmanybeers" Dowling, a hardy farmer from outside Sydney.  He had acquired his nickname for his voracious appetite for the sauce, an appetite that would put many an Irishman to shame.  Tim could easily sink 10 cans of beer of an everning and be up bright an early the next morning ready for another hard day's slog on the bike.  Cycling in the Alpes was probably easy for him, considering that just before he had left Australia for the trip he was busy building a road!  I was eager to get to the lunch stop on top of L'Iseran because my chainset sounded like it had a little tweety bird installed in it, so I hiked up the pace and soon I was out on my own on the mountain. 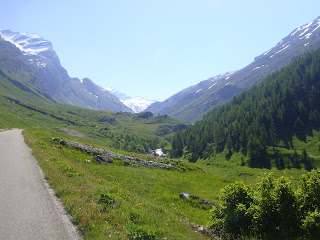 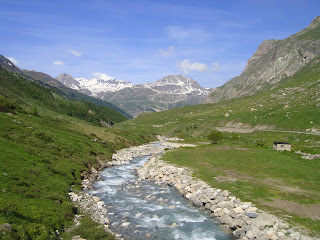 Starting from Bourg-Saint-Maurice, the Col de l'Iseran is 48 km long. Over this distance, the climb is 1955 m (an average percentage of 4.1%). The last part of the climb starts at Val-d'Isère, the famous ski resort: 15 km at a consistent average of 6% (climbing 895 m).  It was a long climb but I felt fairly comfortable, and reached the summit ahead of the rest of the group with a little grin on my face.  I could hear the legendary cycling commentary of Phil Liggett in my head, "Colly Murray, King of the Mountains for Stage 5 of Les Dix Alpes". It was a beautifully sunny day on top and we had a great lunch while basking in the sunshine. 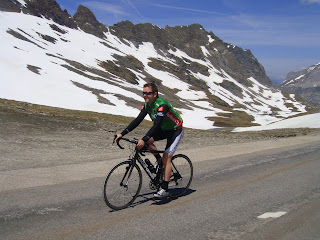 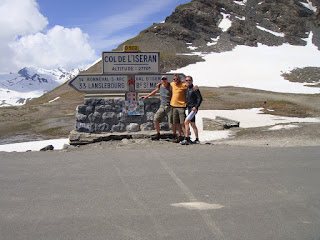 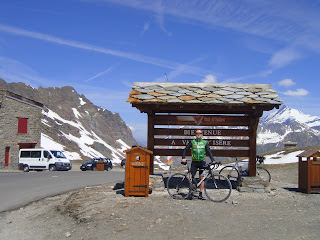 The decent was an interesting one.  It started off really well due to the sprawling landscape that was laid out before us.  Picturesque fields, streams and waterfalls everywhere.  It wasn't quite as barren as some of the other descents, persumably due to the aspect of the mountain?  After a good few kms, it flattened out and once again I found myself in no man's land having dropped a few of the others on the descent.  There was a fairly vicious headwind which made the going hard, and suddenly there was another little col in front of me.  I checked the map and profile and saw no mention of it, and I still remember the name of it vividly (lividly), Col du Madeline.  It was a bit of a ball breaker but I was soon over it and another nice twisty descent into the town of Lanslevillard.  When the rest of the gang started arriving back at the campsite, the first few lines muttered were something like, "Where did that little f*cker of a Col appear out of?". 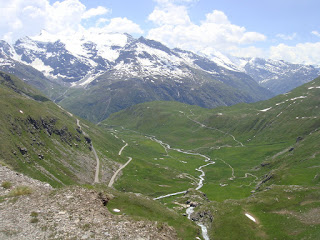 Spectacular descent from L'Iseran
5 Stages and halfway there.  The next day we would head for Bourg d'Oisans where we would have a rest day followed by the legendary climb up to L'Alpe D'Huez.  I could hardly wait! But first we would have to reach the summit of the Col du Télégraphe at 1,566 m and the Col du Galibier at 2646m.  Lots of climbing ahead.
Posted by Colly at 7:37 AM